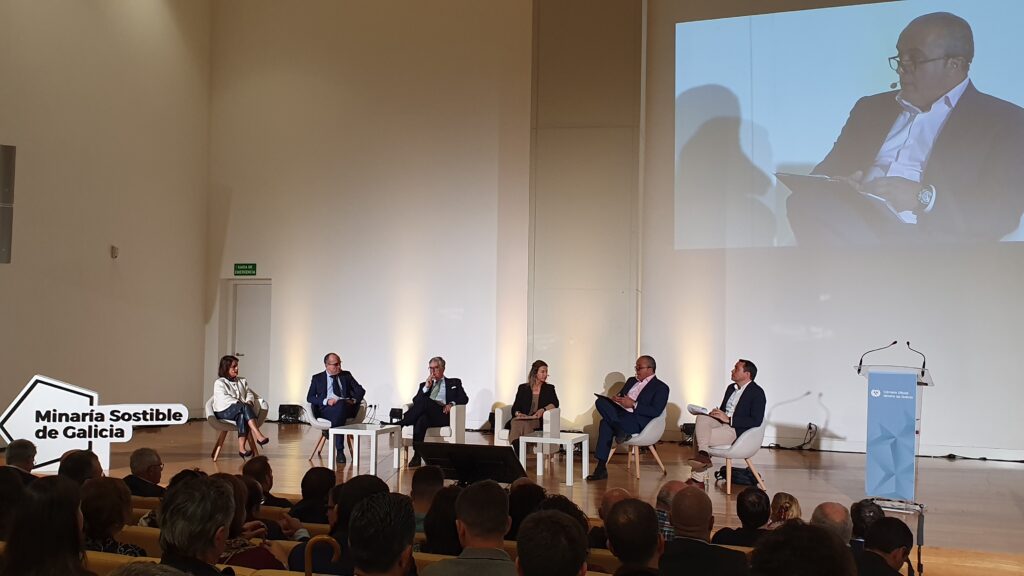 Today, the Technical Director of Strategic Minerals Europe, Francisco García Polonio, participated in the 2nd ‘Strategic Minerals for Galician Industry’ Conference organised by the Official Galician Chamber of Mining (COMG) and Sustainable Mining of Galicia. He did so at the round table ‘Raw materials: research, development and European framework’, which was also attended by the director of GAIN, Patricia Argerey; the president of the CEG, Juan Manuel Vieites; the head of institutional relations of Cobre San Rafael and European Federation of Geologists, Pablo Núñez; the president of Atiga, Jesús A. Lago, and the director of the COMG, Arantxa Prado, as moderator.

The conference, aimed at the Galician industrial fabric in general and the Galician scientific community, highlighted the importance of research and exploitation of critical raw materials for the development of industry, the creation of local value chains, the generation of employment and the increase of Galicia’s competitiveness in international markets.

During his speech, the Technical Director of Strategic Minerals Europe highlighted the value of the Penouta project, underlining the importance that innovation has played in it since the company resumed mining activity in Penouta in 2017, processing the old mine’s sumps and dumps and initiating the exploitation of the open-cast deposit, from which tin, tantalum and niobium were extracted, and additionally quartz, feldspar and mica.

“Innovation is a constant in our company and has been present right from the start in the Penouta project, but also in the Estannio project, which we developed to add value to our production of tin concentrates, guaranteeing that they are obtained with the quality demanded by the London Metal Exchange for their sale on the market, as well as slag recovery. Or in the TARANTULA project, still in force, whose main objective is the development of a set of novel, efficient and flexible metallurgical technologies to recover critical metals such as Nb, Ta and W from secondary mining streams. TARANTULA is undoubtedly a clear example of how our company focuses on continuous improvement, committing to finding a solution to Europe’s dependence on third countries for critical materials. This project will open doors to other mining operations that need to recover old tailings and position us as a pioneering company in the recovery of strategic metals”, he explained.

He also underlined the importance of the recent award of the 30-year open-cast concession, renewable for up to 75 years, which enables the company to fully develop the open-cast mine, thus exploiting both the metallic minerals (tin, tantalum and niobium) and the industrial minerals (quartz, feldspars and micas) available in the mine. All this has made it possible for the Penouta Mine to be the only Tantalum and Niobium mine in Europe, giving it strategic importance as an alternative to obtaining these metals in conflict-free zones, and for these minerals to be considered strategic minerals by the European Union.